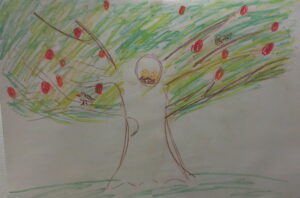 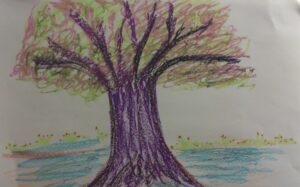 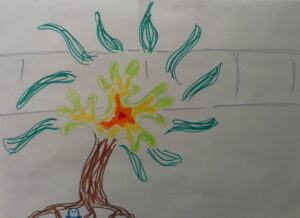 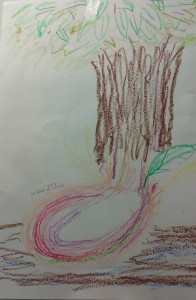 Saturday 28th February, I ducked through the Henry VIII Gate at St. Bartholomew’s Hospital and found my way to the Robin Brook Center. Unsure and a little flustered, I consulted the security guard at the front desk to see if perhaps he could point me in the right direction. He reassured me that I was in the right place, and told me to try the building just next door. As I stepped out of the dim, lonely elevator, I was greeted by the vibrant sounds of young people laughing from a nearby corridor. There, in a room decorated with anatomical anomalies, a group of enthusiastic students had gathered for an event hosted by Teddy Bear Hospital.

The objective of this charity is to help young children lose their fears of doctors and hospitals by establishing a dialogue between the children and the student volunteers—and just having fun! The London Art Therapy Centre was invited by the Teddy Bear Hospital to run two art therapy workshops for the students. These young people are currently studying to become doctors, dentists, and nurses. I joined my colleague, art therapist Colleen Steiner Westling from London Art Therapy Centre in order to set up for the students. We configured the chairs in a circular formation and spread out an array of art supplies (paper, pencils, crayons, markers, pastels, etc.) in the centre of the circle as to invite everyone in.

The first group of students filtered into the room, one-by-one, and found a place to sit. I could sense that they were a little apprehensive at the onset of the workshop. Colleen gave a brief introduction to the history of art therapy, and then invited everyone to draw themselves as a tree. She reminded them that it is important not to be critical of one’s work; the purpose of the task is not to produce a masterpiece, but something that is meaningful to you in some way. Everyone slid out of their seats and collected their supplies before returning to their respective spots. Twenty minutes was allocated to the task. At the ten-minute mark, Colleen announced that the time was half-way over. At five minutes, everyone started scribbling a little bit faster, and inched their noses a little closer to the paper. Some of the students glanced around the room to investigate what their peers had created.

After the art-making period came to a close, the students were given an opportunity to share their artwork with one of their peers. They were asked to communicate to their partner what was going on for them while they were creating the image — what feelings came up prior to and during the process. The other student was then asked to reflect upon what they noticed in their peer’s artwork. After, the students were invited to share with the whole group. There was a long stretch of silence. Thankfully one brave soul volunteered to share her thoughts, and several others followed. The students were then invited to ask questions about art therapy generally and how they can utilise it in their practice someday.

The second group of students responded very differently to the first group. Overall they seemed much more cohesive, as if they all knew each other already. Once they were assigned the task, they rushed to the floor to choose their materials, and they stayed there. They all kneeled on the floor and bent over their paper, intent on their work. This group was far more open during the sharing period. They also asked lots of insightful questions, which Colleen responded to thoughtfully.

Although I did not engage in the art-making process, I had an interesting perspective of the workshops. I was able to simply observe and absorb. What struck me most was how engaged the students were for those twenty minutes; it was remarkable, really. The task was so simple, and yet each student focused their energy on creating an image that said something about who they were as an individual. And truly, each image was as unique as the faces staring intently at the page in front of them.

When the workshop came to a close, the students were invited to take their drawings with them as a momento of the day.  I hope that in the future these health care professionals really do use art in their practices to ease the minds of their pediatric patients, and establish a line of communication with the child. And maybe they, too, will continue to use art as a way to escape the demands of everyday life—and the rigor of their studies.