“Thanks for the evening – I found it very moving and thought provoking and a privilege to attend. A rare and special kind of treat – and very powerful”.

On 10th May 2014, to the crunch of popcorn, The London Art Therapy Centre screened its first ever Evening of Art Therapy Film Shorts to explore what film media brings to the therapeutic and creative process. Professionals and students from diverse fields of art therapy, puppetry, psychiatry, psychotherapy, art and filmmaking participated in watching and discussing a series of extraordinary film shorts.

The night started with archive footage of ground-breaking work from Family Tree School in the 1970’s, following the progress of a 5 year-old autistic girl over 2 years, who engaged with art and music therapy as intrinsic to her social and educational development The film was made in the early days of video when it was used as an observational tool, influenced by the ethological approach of Professor Niko Tinbergen. Hephzibah Kaplan who worked at Family Tree with this client introduced the film, and 20 years later the same client was referred to an art therapy service where Hephzibah was working. The discussion focussed on film as an observational and educational tool, and its ability to capture a client and therapist’s journey through time.

The short documentary was followed by a moving personal film, Weather, made by puppeteer Joni-Rae Carrack. Joni-Rae introduced her film and spoke about her own experience of anxiety and how in making this tender piece, using shadow puppetry, she was able to explore themes of depression and anxiety. She chose the metaphor of weather to convey mood swings to powerful effect and affect. After the film we discussed the importance of film in sharing personal inner states with other people, and how revisiting a personal creative piece made years earlier can offer new insights. The shadow puppetry technique was complimented for its simple power and also showing the ‘manipulation’ of characters on screen.

Students from Roehampton gave us our third art therapy short, made as part of a film module on their course to communicate their placement experience in a secure unit. To preserve confidentiality, and in the absence of clients, the camera focussed on the hard textures and brutal architecture, the sounds of clanging keys and corridor echoes. Some of the audience responded by sharing how the film took them back to their own experiences of similar clinical placements, evoking feelings of claustrophobia, fear and anxiety, and equally their own memories of how important supervision was as a container. We all felt the alienation and depersonalisation of these environments and thought about how art therapy in these institutions can introduce a softness.

The next three films were animations from Tony Gammidge and Mario Guarnieri, made as part of the Touchstone project working with patients with a history of self-harm in secure psychiatric units. The patients were the creative directors of these claymation films, supported by Tony and Mario. They also recorded the voice-overs and narrative. These powerful films explored issues of sexual abuse, shame, self-harm, the Justice system, despair and hope. 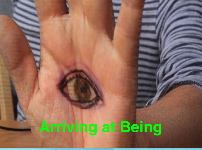 Although they did not make easy viewing, the films showed the extraordinary capacity of the human spirit to survive and keep on living. The use of plasticine, a child’s play material, to show the adult themes and enactment of violence was all the more powerful in its incongruity.

Tony and Mario made it clear that this project was set up as an arts project with aesthetic aims, as opposed to an art therapy project, although the benefits of participating proved highly therapeutic to patients. Tony talked about how the creative process could be joyful, even if the material being worked upon is very difficult. Mario shared his thoughts that becoming a filmmaker had given these patients a sense of control over their story.

The last film from Tony Gammidge was made with a group of men with histories of violence, showing a fictional group therapy session in which each man was represented by a teddy bear and shared their story, both of their actual crime and of what might have led them to this crime. This powerful and hard-hitting piece provoked conversation about how powerfully the teddy bears communicated the vulnerability of these men. Tony and Mario also spoke of the benefits of showing these films within the institutions they were made and how other health professionals received them.

We closed the evening with a beautifully made film by David Little, The Wanderings, featuring his work with an older Italian lady with advancing dementia. The film captured their conversations, her art-making and photographs, reflecting together on her past life and memories. The audience was visibly touched by the humanity of this piece, of how the film media worked so well to capture the relationship and journey between film-maker and subject. The title, The Wanderings was felt to be a powerful description of the dementia process. The film raised comments about the fading and passing of time and memory, and was a moving ending to a moving evening.

One of the key themes that emerged throughout the evening was the unique ability of film to capture an inner journey of growth and change with other people, using sound, moving image, and music to connect with the ‘viewer’ in such a fully immersive way. Stories and journeys can be condensed into short pieces, and can also be used as evidence of change. Films can open us up, touch us, educate us and connect us both as individuals and as a community. The evening took the audience on a journey from the start with a 5 year-old, to an ending with an 85 year-old. A life cycle of clients from different walks of life and with different stories, each helped by participating in the creative process.

Thanks must go both to film-makers and the audience who were so engaged, reflective and sensitive in their responses and discussion after the films.

Times and technology are changing, and as one experienced art therapist explained, clients now bring film and social media into therapy rooms and we need to respond to them. Interestingly, those art therapists who had previously attended the BAAT AGM earlier that day told us that digital media had been on the agenda, and that we all need to engage with this new area, explore its possibilities, whilst thinking about how to keep this process safe for our clients. The audience explored the tension of this new media with some of the regulations in the NHS, both in terms of technology, but equally with patient confidentiality. Film-maker Tony Gammidge shared that in his own experience, if handled well, confidentiality has not been an issue with the people he has worked with. Instead, more often people really want others to benefit from their own experiences through sharing the work. This insight was reiterated through the other films.

Given the success of Film Night, London Art Therapy Centre will be organising another in the future. Watch this space.

Finally – the idea that creativity begets creativity was reinforced by this email:

“ Just wanted to say thanks for the film evening last night. My friend (a psychiatric nurse) and myself (an art therapist) were pleased we made it in the rain and wind, to honour the creators of these varied and heartfelt animations. Left with a sense of uncomfortableness and humility. Inspired to write a piece of poetry…”