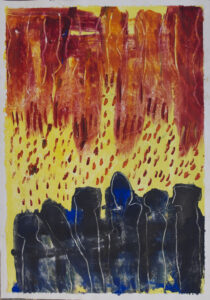 On Wednesday, 18 March, I attended the monthly clinical meeting at London Art Therapy Centre on the topic of Death and Dying. The meeting was coordinated by art therapists Mirella Issaias and Colleen Steiner Westling. The director of the centre, Hephzibah Kaplan, introduced the theme through various references, thoughts and ideas, and facilitated the discussion. The monthly clinical meetings provide the therapists an opportunity to discuss relevant theoretical material and themes that occur in therapy but may not have been formally ‘taught’ in trainings. I was invited to join the meeting, so I made myself a cup of tea and sat with the others in a circle in the studio. I was both eager and a little apprehensive to participate, as I am a student and have no clinical experience. When I was asked to introduce myself, I also stated that in my twenty years on this planet I haven’t had any personal experience with death. Upon reflection, I realized that my statement wasn’t entirely true.

The summer before I left for university, I learned that my cat Tumble Weed, endearingly known as Booba, had cancer. We had all known that something was wrong, and yet we waited. Lumps began to form under the skin on her abdomen and she began to lose weight. Still, my family did nothing. We couldn’t afford to take her to the veterinarian. I just think that everyone was scared to know the truth about her condition. Seeing her in that pathetic state broke my heart; I felt such guilt because I couldn’t even hold her the way I used to out of fear that I might hurt her.

I couldn’t stand to see her suffer that way any longer, so one scorching hot summer afternoon I loaded her into my car and drove to the veterinarian’s office. I remember it distinctly. She hated riding in the car, but that day was particularly traumatic. I sat there in the driver’s seat, with her in the seat to my right, stuck in bumper-to-bumper traffic with no air-conditioning. Each groan that escaped her made my chest tighten. I paid for the appointment myself. When the veterinarian examined her, he confirmed our fears—she had mammary cancer. He said that he could attempt to perform surgery to remove the tumors, but at this stage it had most likely metastasized, so there was little hope.

I carried her back out into the oppressive summer heat and loaded her into the car. I cried most of the way home. I whispered to her like you would to soothe a crying child, but I think that was more to reassure myself than to calm her. When I came home, I told my family what had transpired. At the time, we could not afford to have her put down, but the veterinarian assured me that she wasn’t in any pain. We could only make her as comfortable as possible for the time that she had left.

I moved out of the house, and left for university at the end of the summer. When I returned home to visit in October, I sat in the middle of the floor, and my precious little cat came and lay between my outstretched legs, her head resting on my thigh, her eyes set on my face. That’s the last photo I have of her. In early December, I received a phone call from my step-father saying that she had died.

Caught in the midst of exams, I barely allowed myself the time to process her death. My step-father built her a wooden cross and buried her in my grandparents’ back yard. When I came home for the holidays, I visited her tiny grave. I walked across the immense stretch of grass, my feet crunching through the stiff layer of fresh snow that had fallen, in order to say goodbye.

That was the first time in my life that I lost a friend. As a child, I lost my grandparents. I was too young then to really understand what it meant. I just remember my dad tearing through the doorway into our living room, crying out for his father. He slammed his fist against the wall so hard that the framed photos fell to the floor, the glass shattering. His death was so sudden, and the pain my father felt was so tangible to me, even then. I think that was the moment when I became aware of the concept of mortality.

There’s a quote that was shared during the meeting: “Death ends a life, not a relationship.” That one is from Mitch Albom’s novel Tuesdays with Morrie. I think that it speaks a great volume about the human experience of death, or rather of living with death. For those of us who are left behind, we struggle to maintain that relationship with our lost loved one; seeking counsel can help us to process our emotions.

Each and every one of us lives with death. The therapists in the studio with me that night are no exception. Each of them shared stories about clients who were forced to come to terms with the death of a loved one. One therapist told of a client’s suicide and the impact of this type of loss. After the meeting I learned that another therapist went home that night to learn of a death in the family. Everyone at the centre communicated their condolences for this person’s loss, but what can we really say to someone who has lost a loved one? We explored this question, among others, in the meeting. Questions such as “If clients come from a spiritual or religious background, how might that affect their experience of bereavement?” and, similarly, “Why is it necessary to understand the various cultural practices surrounding death?”

During an art-making exercise, we were asked to create an image using the word “decay.” The facilitator posited that people often fear the decay that leads up to death, rather than death itself. When I watched my first pet wither away until there was nothing left of her but a hollow frame, holding in what little life it still contained, I was almost relieved to hear that she had died. The death of my grandfather, though, was sudden. The violent, passionate reaction of my father was evidence enough that no one had anticipated it.

What struck me most about that meeting was that although there are so many approaches to the treatment of grief and to the topic of death, death is an individual experience. Everyone thinks about it, speaks about it, and writes about it in a different way. We strive to understand it, and try to prepare ourselves for it. Some try to fight it, and search in vain for ever-lasting life. You don’t have to be a philosopher to question our place in the universe; questioning is innate in us. One of the therapists shared a very touching story of a moment she recently shared with her own child. When she finished reading to him one evening, he asked: “Mom, are you going to die?” All she could do was hold her child to her chest as he wept. That night on my way home from the centre, I sat quietly by myself on the Tube and tried to make sense of all the theories, the thoughts, and the clinical material floating around inside my head. Like that little boy, my eyes brimmed with tears. It was only then that I realized that we only have so much capacity for understanding. After that, it only suffices to feel—and that is enough.