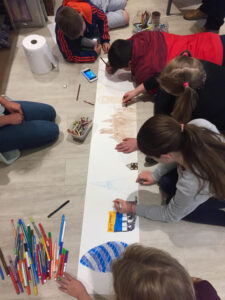 On August 16th Louise Fitzpatrick and I, both art therapists at London Art Therapy Centre, had the pleasure of facilitating an art therapy workshop for a group of children living with food allergies. The workshop had been requested by the health organisation Aimmune whose mission is to “improve the lives of people with food allergies. . .”

Dr. Marc Thomas from Aimmune had previously met with Hephzibah Kaplan, director of London Art Therapy Centre, to discuss the workshop, its aims and objectives and to discuss the protocols around a diverse group of children (age range 7-12) who had never met each other before. Parental consent forms were prepared and the children were all brought to the centre by Marc having had a group lunch together beforehand.

The children introduced themselves to us and again to each other and were invited to use the art materials in any way they liked to express something about living with their allergies. While it would be expected that new children coming together for the first time may be reticent to open up, their shared knowledge of sensitivities to harmful things that other people didn’t have to fear served as a cohesive start.

The children were curious about each other’s stories and experiences, and encouraged each other to participate in both the art-making process and the sharing of their personal narratives. The children that shared difficult memories and experiences were met with responses from other children that demonstrated understanding and empathy, which seemed to evoke a sense of relief and excitement and bring about further engagement within the group.

The children’s food allergies in some cases were similar to each other while some were unique to themselves. Through the art making and verbal sharing some showed how much they understood the complicated aspects of their immune systems as well as expressing how confusing the terminology of the medical world can be. Their experiences of being poked, scratched and tested were relayed with courage, honesty and in some cases humour, with some important concrete questions such as what is “a trial”? We also heard anecdotes of unpleasant and frightening allergic responses they’ve had which were shared with all.

During the two-hour session, the group created two art works: an individual piece and then a group piece depicting a bespoke skyline of London containing their important elements. (This was requested by Aimmune for their forthcoming conference). Within the group there was also space for other memories to arise that had a strong feeling content, such as experiences of fear and worry in response to another family member being very ill.

As a co-facilitating art therapist, I felt honoured to bear witness to the strength of character these children carried as well as their ability to be playful, creative and to find joy in the group sharing. To quote a child on leaving “I just wanted to meet some of my kind!”

While these children and their parents maintain vigilant attention toward pathogenic risks out in the big wide world, they seemed enlivened as they rejoined their parents and Marc from Aimmune to go on a sight-seeing tour of London.